For a short guide on how to enable GPU-PV for Hyper-V, click here.

Nowadays, Hyper-V has evolved from a server virtualization software to something very integral to contemporary Windows operating systems. The ability to run Linux applications (WSL 2), Virtualization-based Security, and application containerization (the WDAG and Windows Sandbox) are powered Hyper-V. Still, Hyper-V is one of the best virtualization platform available in Windows platform, if your guest is either a modern Linux or modern Windows. Being a Type-1 Hypervisor with tight integration to the host operating system means that Hyper-V offers unmatched performance when virtualizing said guests.

In this post, I am going to guide how to enable GPU acceleration in Hyper-V on Windows 10 guests. This is different from the previous RemoteFX approach (which is already discontinued, by the way), in which it creates a virtual GPU on guest and the guest application’s call on graphics API upon that virtual GPU is interpreted, translated, forwarded to host, and back again. Besides inefficient, this approach means limited graphics API support as different hardware has different characteristics and supports a different set of APIs, where a common denominator has to be selected. Further, every time there is a new graphics API such as Vulkan or DirectX 12, the whole system has to be engineered. This approach is similar to those used in VMware Workstation and VirtualBox, and they share the same limitations as well.

Enter the WDDM GPU Paravirtualization (or GPU-PV for short). GPU-PV leverages the new graphics driver model in WDDM 2.5 (first introduced in Windows 10 version 1809) to provide support for virtualizing GPUs right from the graphics driver itself. The GPU is virtualized similarly to CPU (for example, multiple virtual machines and the host can share a single GPU, and a single virtual machine can fully utilize the GPU when the GPU is unused). Guest virtual machines use the same GPU driver as the host, which means that the full capabilities of the GPU are supported on the guest as well.

In this DirectX support for WSL 2 announcement, it is said that GPU-PV is already supported for WDAG (which was introduced way back in Windows 10 version 1809) and Windows Sandbox (introduced in Windows 10 version 1903). The announcement goes further that “GPU-PV is now a foundational part of Windows” and “Today this technology is limited to Windows guests, i.e. Windows running inside of a VM or container”. Indeed, as can be seen in this Windows Sandbox configuration reference, GPU support is explicitly mentioned there. Since Windows Sandbox is pretty limited, it would be nice to have this feature on a regular Windows 10 Hyper-V virtual machines. Unfortunately, documentation to enable this feature is scarce and practically nonexistent even on the internet.

Now cut to the chase, let’s start from PowerShell. Hyper-V virtual machines are typically managed with PowerShell, and perhaps we could find something there. Let’s begin with Get-Command, which will return all commands available in the current PowerShell session. 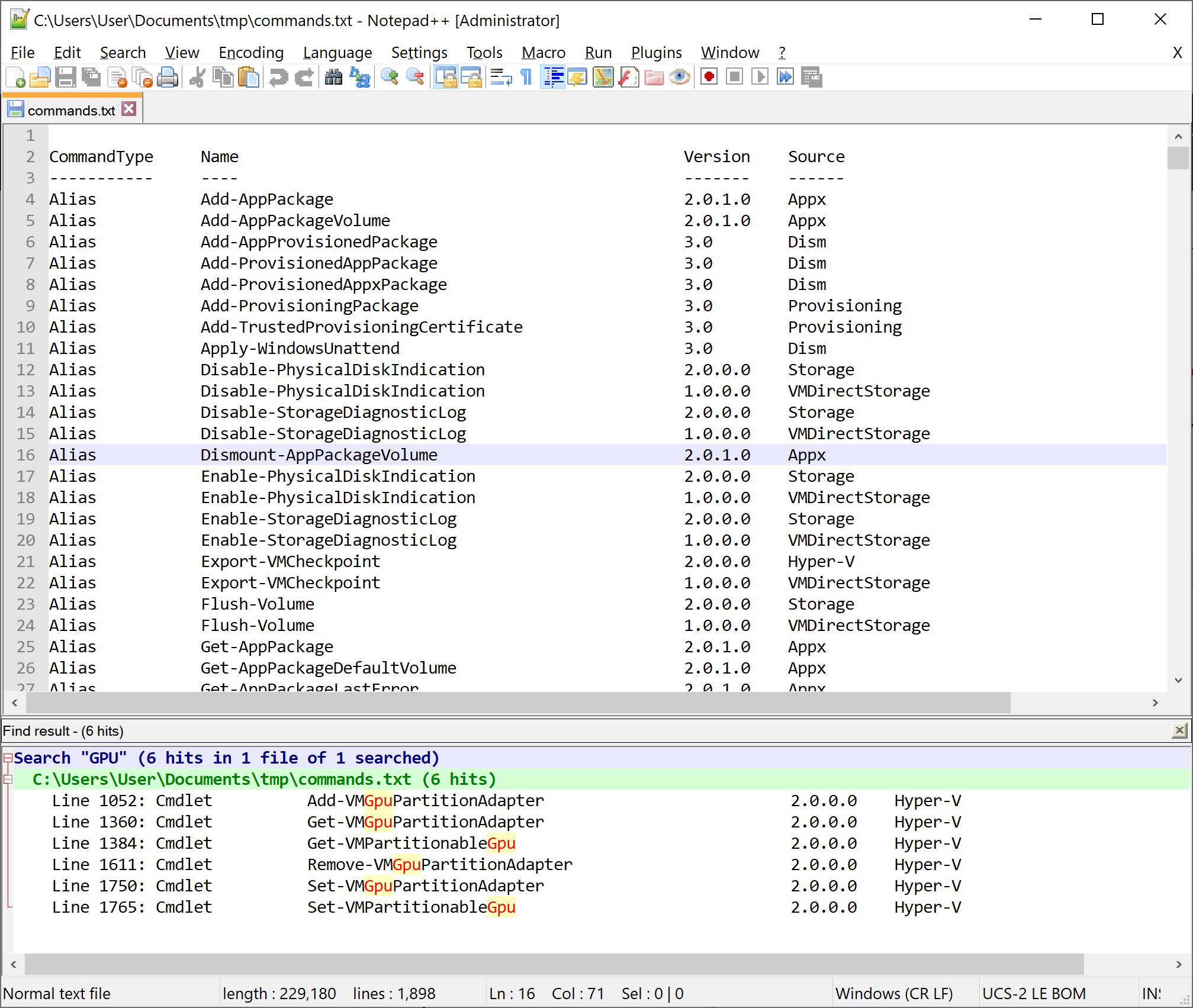 Searching the output for the word “GPU” yields these results! Seems like we are on the right path! Let’s try to run those commands. First, let’s begin with the Get-VMPartitionableGpu, which yields the following:

It lists two GPUs here, which is what my system has (the Dell XPS 9560 with the NVIDIA Optimus system). Based on the PCI vendor IDs, the first one must correspond to the NVIDIA GeForce GTX 1050, and the second one to the Intel HD Graphics 630. The opposite of this command, Set-VMPartitionableGpu, seems to be used only for limiting the partition count.

Now, let’s try to set up a Hyper-V Windows 10 virtual machine, and try to run the Set-VMGpuPartitionAdapter on that virtual machine. This command accepts a plethora of options, which includes many things listed from the Get-VMPartitionableGpu above. However, we will skip those options and stick with the default settings. 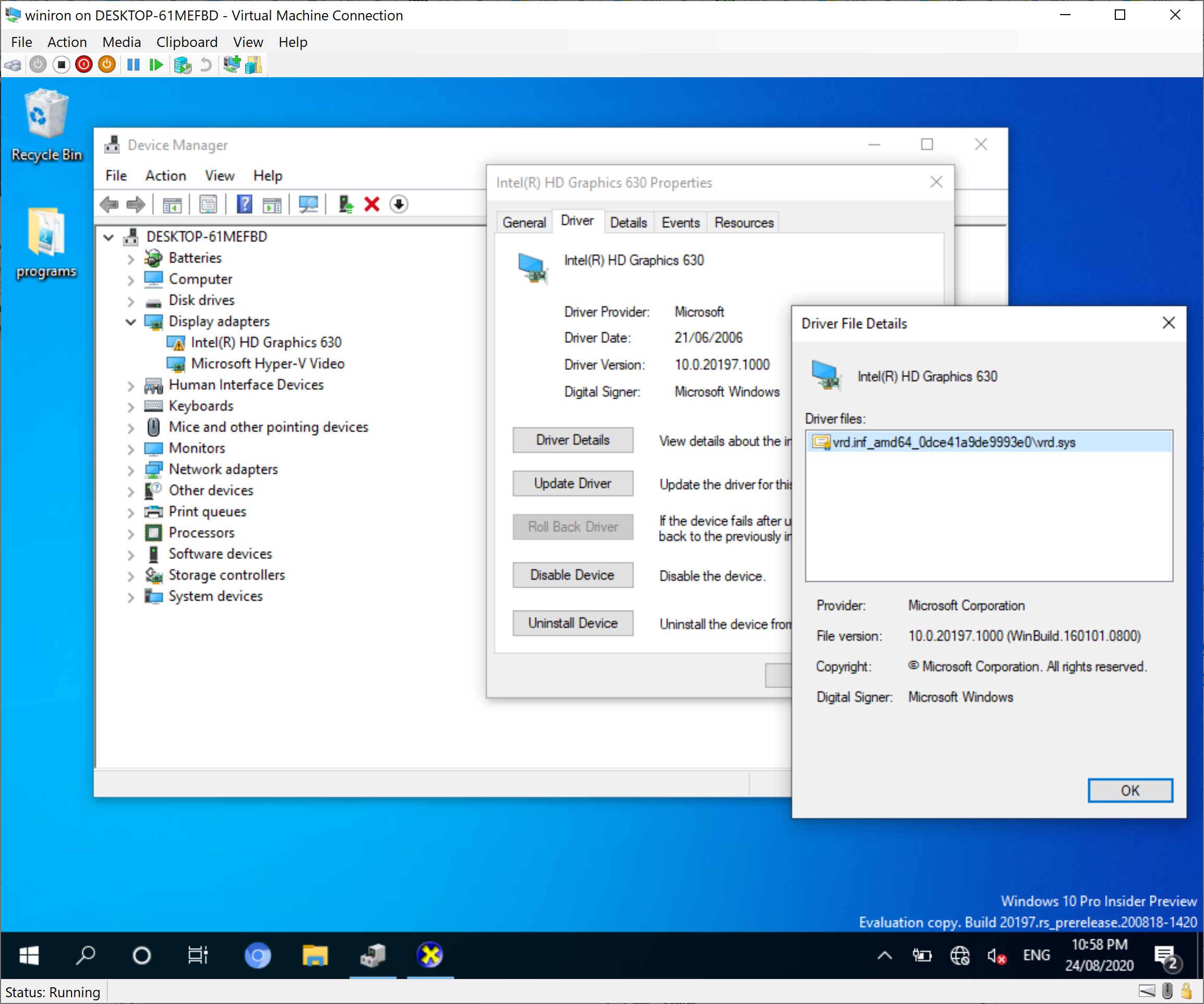 Neat! Now GPU is showing up with the same name as the host’s GPU. However, the driver being used is vrd.sys and there is error code 43 as well. GPU acceleration still does not work obviously. Let’s go back to Windows Sandbox and see what it is doing there. 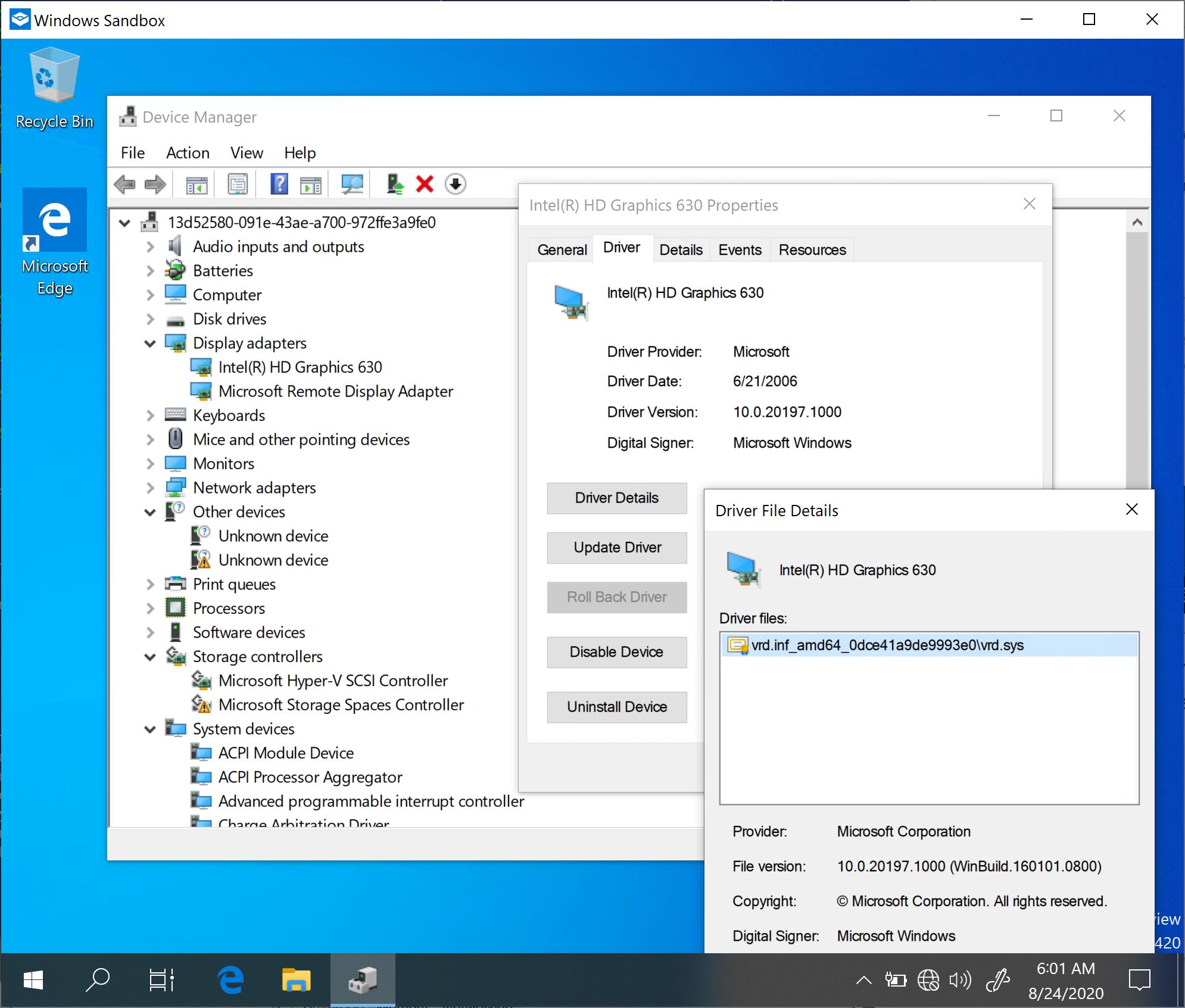 The Windows Sandbox has the same behavior as our VM! The GPU shows up as Intel HD Graphics and is using vrd.sys as well. However, GPU acceleration is working fine here. What gives? Let’s continue to dxdiag inside Windows Sandbox. 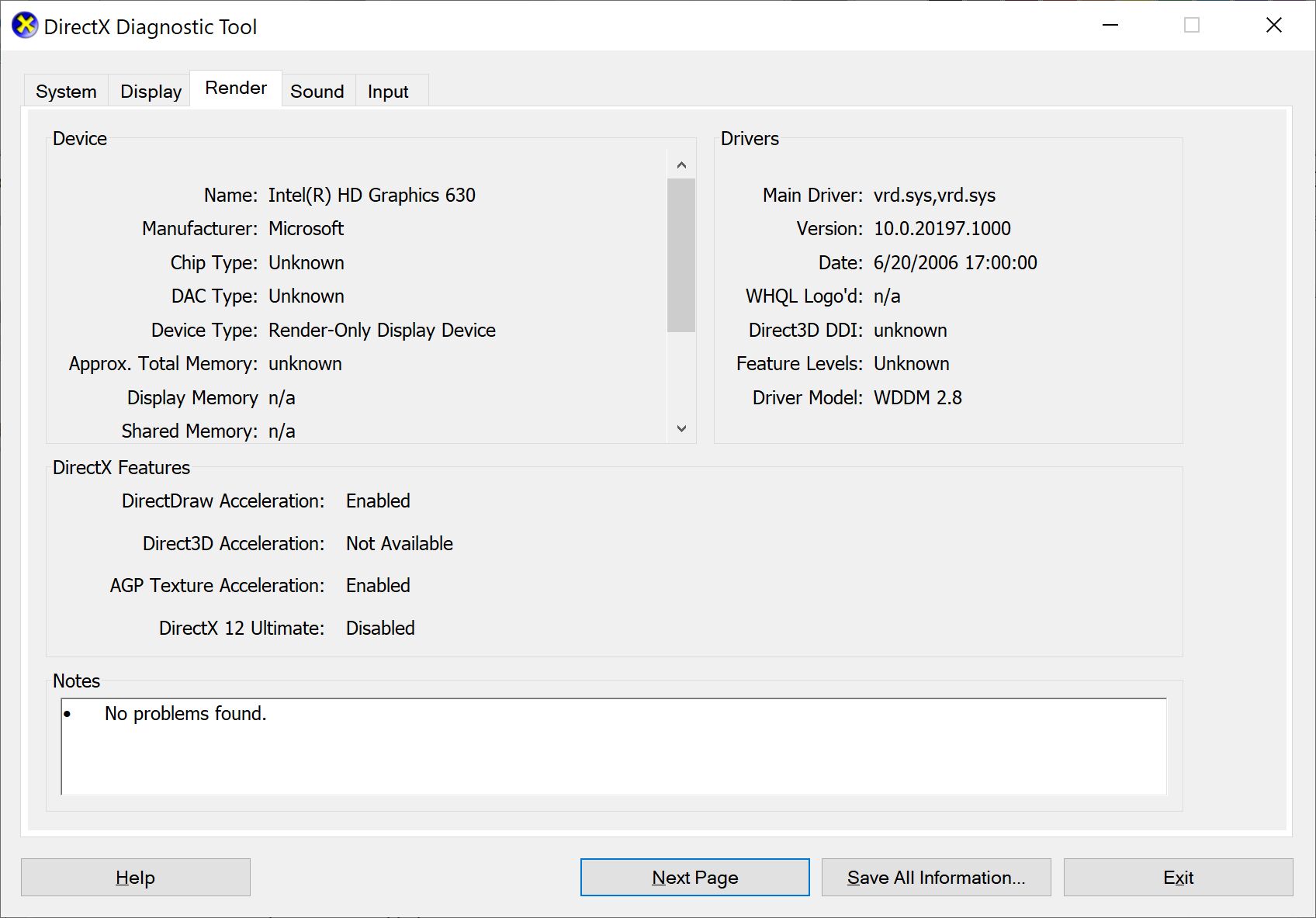 Here, we can see that we got a render-only device. Both name and Driver Model (WDDM version) correspond to host drivers. However, other elements do not seem to match up. Perhaps vrd.sys might internally load Intel’s driver somewhere? One thing for sure is that Windows Sandbox mounts certain components from the host Windows operating system, so the host’s drivers might be mounted somewhere as well. In the host’s dxdiag, one of the driver file listed is igdumdim64.dll.

Lo and behold, searching for this file in C:\Windows folder results in a new discovery! There is a folder in Windows Sandbox called C:\Windows\System32\HostDriverStore, where the host’s C:\Windows\System32\DriverStore of hosts get mounted here. This folder is not available in either host or our custom Windows 10 VM. So, let’s copy the driver inside host’s DriverStore that corresponds to the Intel HD Graphics (this information could be found in either dxdiag or Windows Device Manager by opening “Driver Details”). 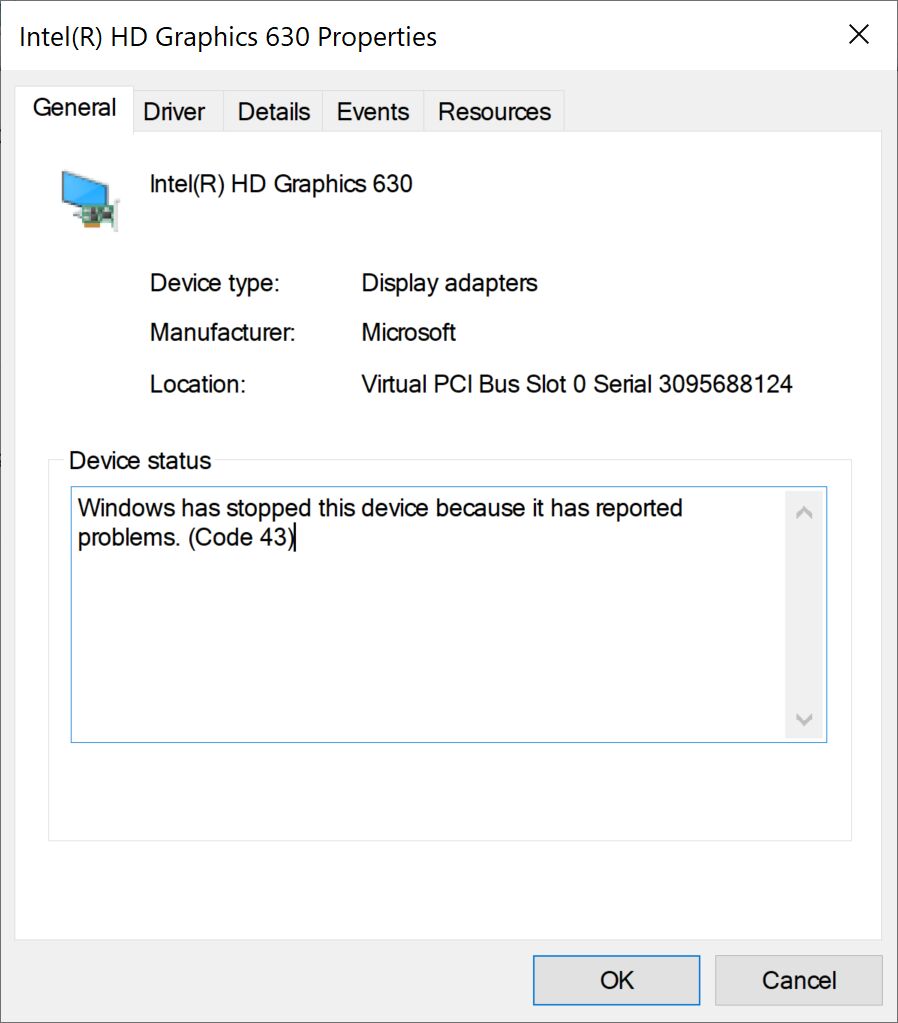 After copying the files, starting the virtual machine resulted in the virtual machine stuck at the Hyper-V boot logo for a few seconds until finally, we got to the login screen and … no GPU acceleration😢. Opening the device manager still shows error 43. Time to give up? Not yet! Perhaps the partitioned GPU is lacking a memory-mapped IO (MMIO) virtual address space?

Hyper-V supports another kind of GPU for the virtual machines, which is Discrete Device Assignment (DDA). DDA fully dedicates a GPU to a guest virtual machine. This blog post explains how to enlarge the MMIO space for both under 4 GB mark and above it for use with DDA. The post also suggests that “write-combining” be enabled. So let’s follow the post’s suggestions: 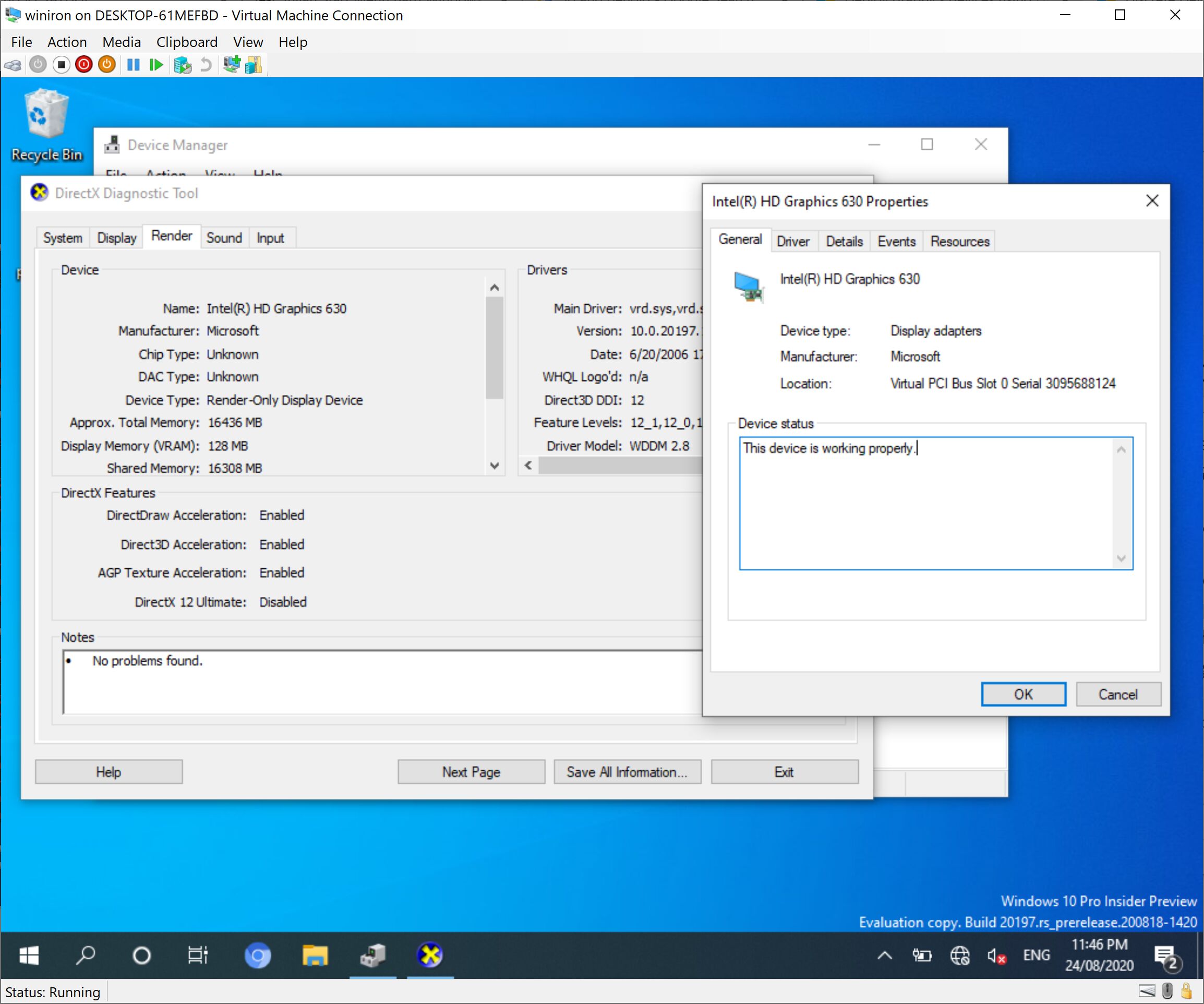 And here we go! GPU acceleration works the same way as it is in Windows Sandbox! Now time to do some benchmarks!

Let’s start with the AIDA64’s compute benchmark. This benchmark performs various relatively simple tasks using OpenCL API. The first image (the one that says “HD Graphics NEO”) is the result from the guest, and the other is from the host. The results are pretty good! Well within the margin of error of the host’s GPU performance! 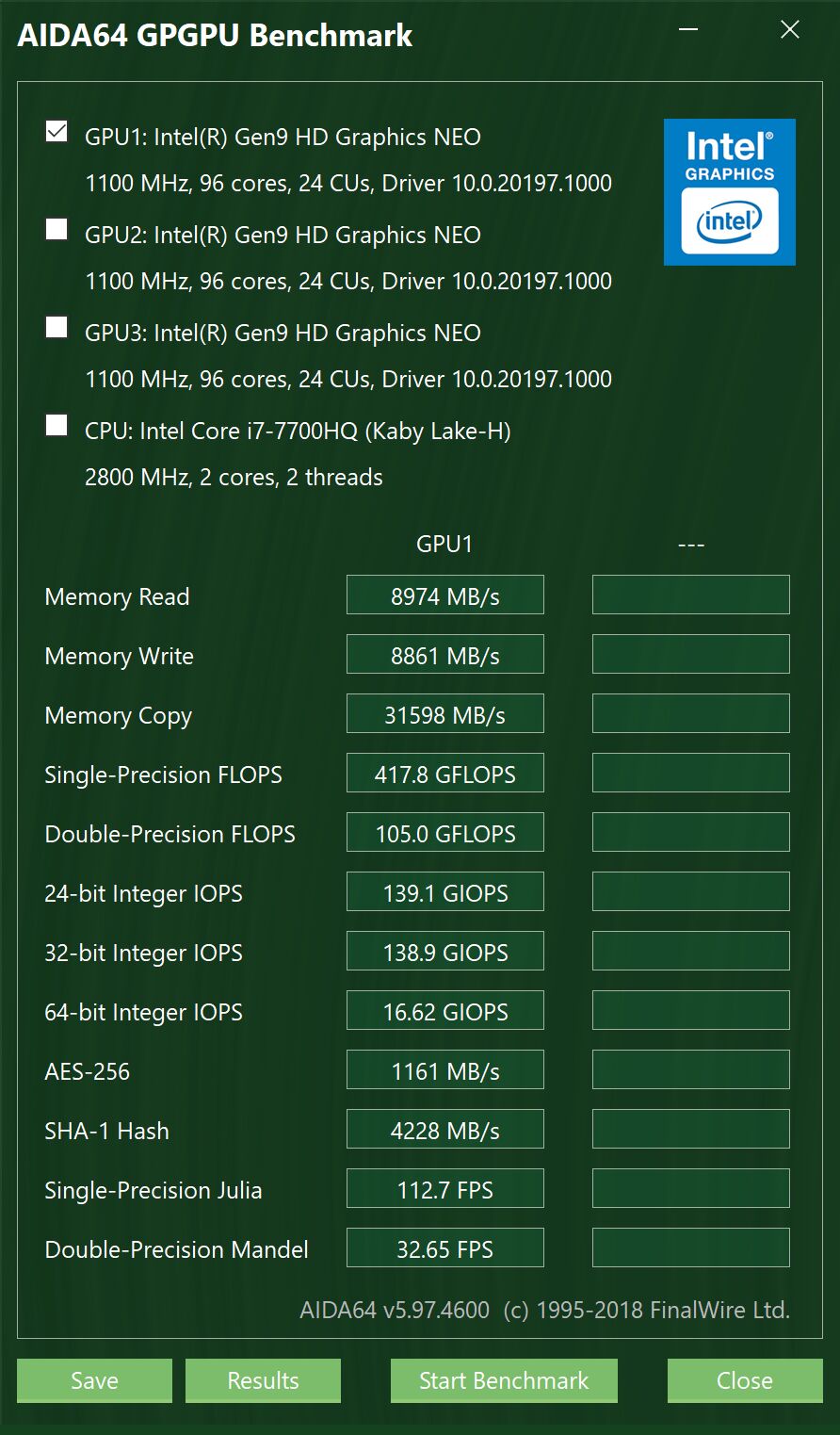 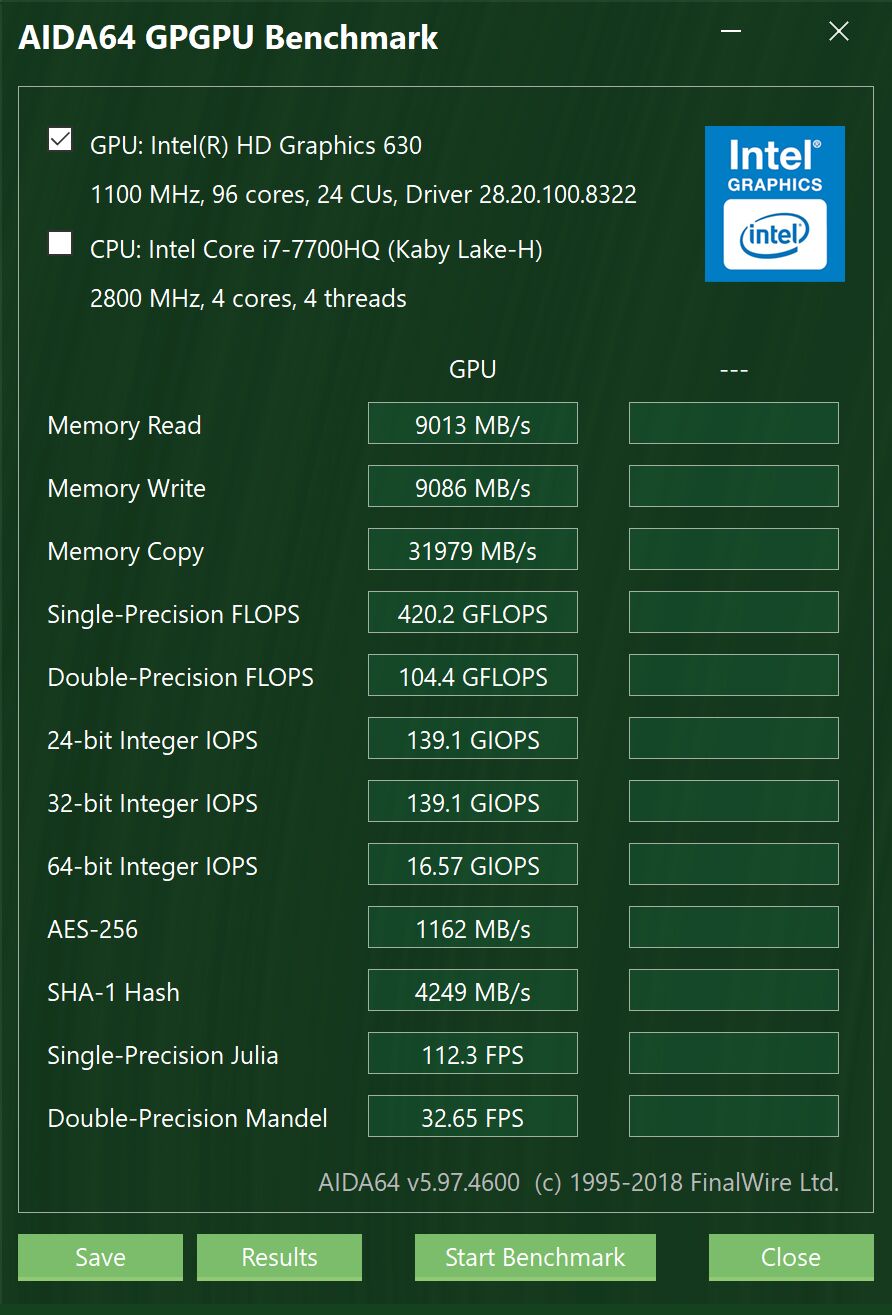 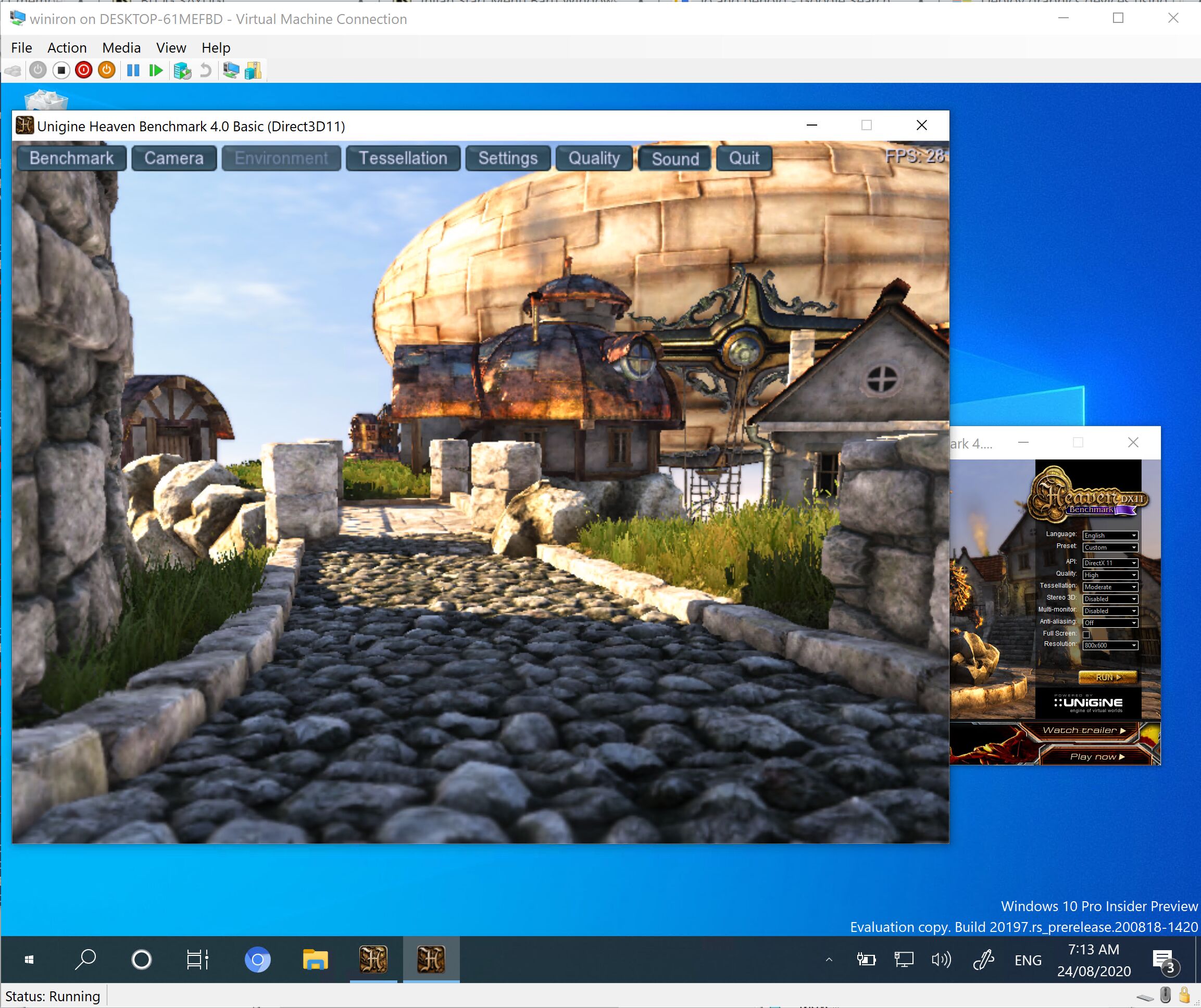 Now the only thing remaining is the ability to select which GPU should be used for the virtual machine. Unfortunately, I could not figure it out yet. The GPU-PV related commands shown at the beginning of this post does not seem to indicate that we can choose GPUs manually, without disabling the GPUs that we don’t need. Please comment if you know the way!

Partitioning a Render Only GPU

Render only GPU drivers do not have display outputs attached to them. This is commonly the case with “compute-only” GPUs, such as NVIDIA Tesla and AMD Radeon Instinct. However, these GPUs are also common on laptops with NVIDIA Optimus configuration, where the NVIDIA is the render only device. Testing GPU-PV on such GPUs (all tested are NVIDIA Optimus GPUs) on the released version of Windows 10 (version 2004 as of this writing) resulted in guest’s graphics stuck. Guest’s CPU still responds normally, and the guest responds to remote desktop requests as well (remote desktop has to have graphics acceleration disabled). Connecting to a remote desktop with graphics acceleration doesn’t work, and neither does attaching an indirect display (IddCx) to the partitioned GPU. Windows Sandbox on Windows 10 version 2004 also crashes when used with such GPUs. 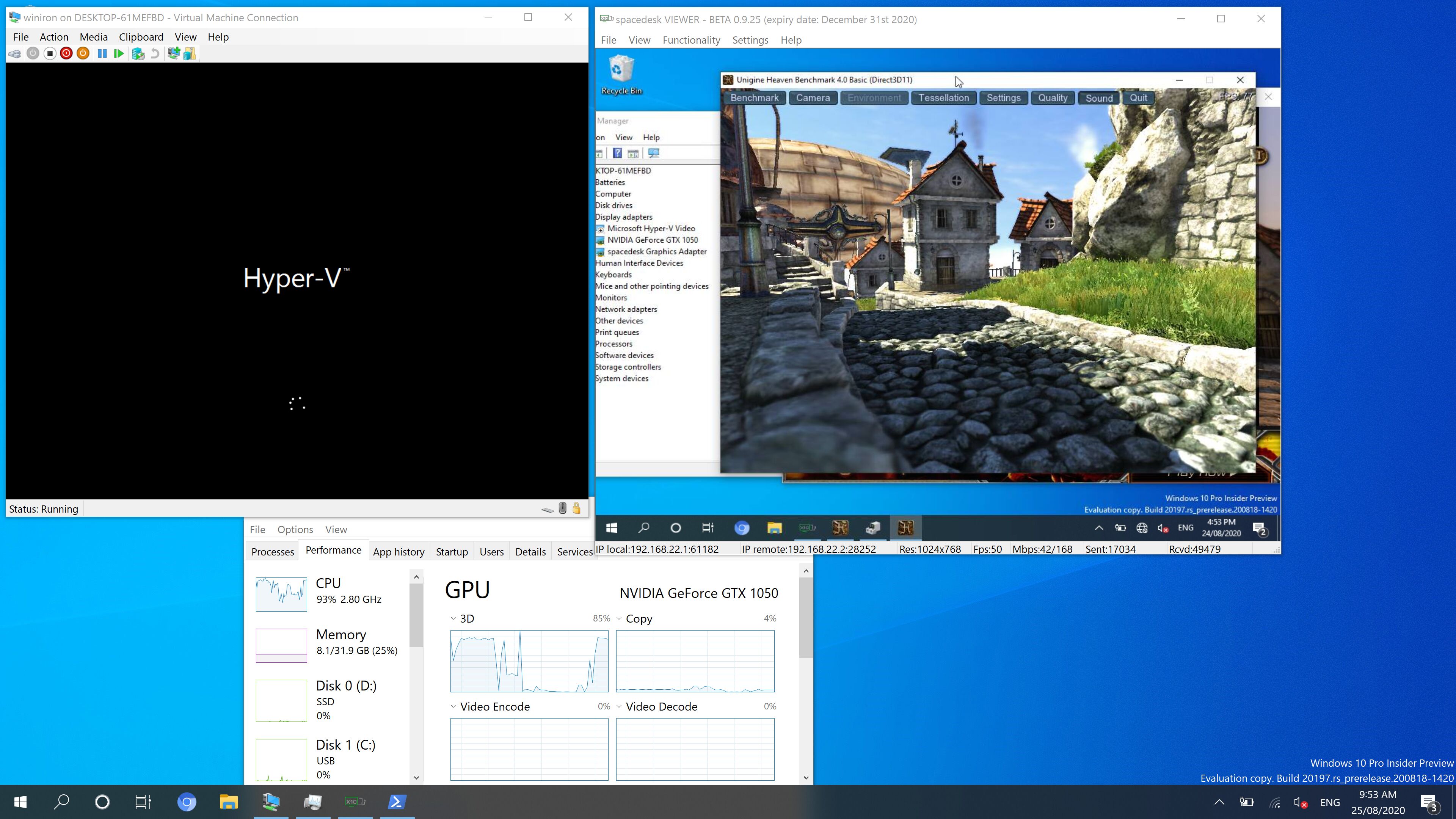 However, in the latest version of Windows 10 “Iron” insider preview (build 20197 as of this writing), GPU-PV on such GPUs works. The only caveat is that the display output cannot be seen from the built-in Hyper-V video driver: we have to use either a graphic accelerated RDP (which is always the case when we use the Hyper-V’s enhanced session mode) or IddCx drivers. More things regarding IddCx will warrant a separate post :), however, my favorite IddCx driver right now is SpaceDesk, which will stream whatever displayed on the driver over IP.

In fact, the guest performs better than the host in this case! Guest scored 2424 at 96.2 average FPS, whereas host only scored at 2246 at 89.2 average FPS. This disparity might come down to the Intel’s SpeedShift on the i7 7700HQ mispredicted the workload and throttles it up and down occasionally. Locking host’s CPU to base clock should improve host’s performance, but not guest’s, as the CPU was pretty busy as well in guest workloads: it has to encode the stream from IddCx display, trasmit the data over local TCP/IP (which has their own overheads), and decode it back. The system used is my personal laptop, which is also used to take the above screenshot.

5 thoughts on “GPU Virtualization with Hyper-V”